Tinnitus is the perception of sound when no external sound is actually present. It is a symptom (not a disease) indicating that something is wrong in the auditory system, which includes the ear, the auditory nerve that connects the inner ear to the brain, and the parts of the brain that process sound. Because the function of the auditory nerve is to carry sound, when it is irritated from any cause, it produces head noise. This phenomenon is similar to the sensation nerves elsewhere. If one pinches the skin, it hurts because the stimulated nerves carry pain sensation.

Tinnitus is often described as a ringing in the ears, but it can also sound like a roaring, clicking, hissing or buzzing. It can affect one or both ears.

What is the Prevalence of Tinnitus in the United States?

According to the National Institute on Deafness and Other Communication Disorders (NIDCD), roughly 10 percent of the U.S. adult population, or about 25 million Americans, has experienced tinnitus lasting at least five minutes in the past year.

Noise-induced hearing loss, the result of damage to the sensory hair cells of the inner ear, is one of the most common causes of tinnitus.

Other causes are usually the result of a number of health conditions, including:

At Infinity Hearing, your audiologist will help you explore potential causes that are triggering your symptoms of tinnitus.

What Are the Symptoms of Tinnitus?

People who suffer from tinnitus have varying symptoms, but often describe the sounds they perceive in one of three ways:

Tinnitus symptoms can have a grave effect on one’s daily life, and as a result may cause secondary symptoms of depression, anxiety, mood swings, irritability, and pain. For some people, tinnitus also affects sleep and concentration, or their ability to work and socialize.

Are There any Risk Factors for Tinnitus?

Can Tinnitus Be Cured?

Unfortunately, there is no cure for tinnitus for patients with chronic (ongoing) symptoms (e.g., people with a sensorineural hearing loss); however, for patients who have an acute (temporary) case of tinnitus, they may see those symptoms go away over time with proper treatment.

Can Tinnitus Be Prevented?

In limiting your exposure to loud noise, you can prevent tinnitus or keep it from getting worse. You can do this by

What Treatment Options are Available for Tinnitus?

There are several treatment options available to help patients experience a better quality of life, no matter the degree or severity of tinnitus they may have. Check out the following list of treatments for tinnitus from the American Tinnitus Association, as well as our list.

If you think you have tinnitus, contact Infinity Hearing at (207) 451-2700 to schedule an appointment with one of our audiologists. During your consultation, your audiologist will first examine your ears to see if anything is blocking your ear canals, such as earwax.  Your audiologist will also ask you about your current health, medical conditions, and medications to find out if any underlying condition is causing your tinnitus. To learn more about Infinity Hearing, check out our website.

WHAT IS TINNITUS, OR RINGING IN THE EARS? 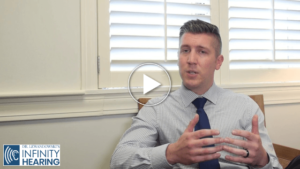